In order to be eligible for registration on the electoral roll, a person has to be a Ni-Vanuatu citizen, having attained 18 years of age on or before the qualifying date (the date when the continuous registration update is to close, six weeks before the polling day).

The VEO establishes RCs around the country according to pre-established schedules, so applicants should be vigilant as to the registration schedules in their areas.

Applicants can go to any registration center around the country, but have to provide proof of residency in the in the polling district they intend to be registered at.

It is highly recommended, however, that applicants go to register at the RC in their polling districts.

Upon arrival to the registration center, applicants are given a registration form, which must be duly filled out. All applicants must show their valid birth certificate; without a birth certificate it is not possible to be registered as a voter (if an applicant doesn’t have a birth certificate, they must apply for one at the corresponding Civil Registry office). If the applicant has been registered before as a voter and wants to register again (maybe because the voter card has been stamped in all spaces or because the voter wants to change his/her polling station), the old card must be presented and handed over to the VEO. Everyone must include in their forms two witnesses who reside in the same residential area as themselves, and who also have a valid birth certificate. One of the two witnesses must be from a different household but from the same polling district, preferably a neighbor. There is no fee for registering as a voter.

Voters are registered to vote at a designated polling station, closest to their place of residence. If voters change their residence and their new address corresponds to a different polling station (even if it is within the same constituency), the voter then needs to re-register.

Once registered, the applicant will be provided with a voter card. The voter cards, issued by the VEO, are blue for rural areas and red for urban areas, in the form of a paper booklet. The voter card has an ID number which is a row and sheet number. In order to vote, the voter needs to present the voter card at the allocated polling station, with no exceptions allowed.

Voters who have misplaced their cards will be able to have them replaced (“duplicates”), for a 200 vatu fee, according to established schedules set by the registration officers; at headquarters, issuing of replacements (“duplicates”) is a continuous process, but it stops two weeks before polling day.

Anyone who believes they should be allowed to vote and whose name is not on the voters list can ask the PEO to review their information. If they are still not happy with the PEO’s decision, they can appeal to the EC. The EC’s decision cannot be appealed to any other body. 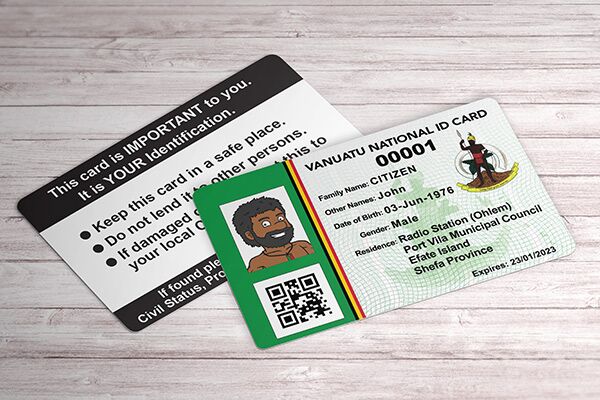 WHAT IS "JOINT REGISTRATION”?

In 2017 the government of Vanuatu decided to introduce a “national ID card” to all its citizens. At the same time, the government also decided to link the civil and voter registration database, in order to improve the quality of the voter register and build trust around it, as well as creating synergies among various government agencies.

These decisions resulted in the launching of a nationwide national ID card registration effort, jointly coordinated by the Department of Civil Registry and Vital Statistics and the VEO. Pilot projects of “joint registration” were designed and implemented in the island of Mota and Port Vila in 2017 and in Luganville in 2018. Currently, joint registration is still taking place in Luganville and Port Vila, with plan to expand to other parts of the country in 2019-2020.

The pilot “joint registration” exercises involve registration centers manned by officers from both the Civil Registry and the VEO. The applicant will need to provide information pertinent to both civil and voter registration. In order to be registered, the applicant must present a valid birth certificate; if the applicant doesn’t have a birth certificate, he/she should register for one at the corresponding Civil Registry office. At the end of the process, the citizen details will be in both the civil registry data base and the voter register database; the registered voter is provided with both a voter card and a national ID card.

The VEO schedules opening of registration centers in various provinces at different times, persons wanting to register should be attentive to the VEO schedule. The VEO HQs in Port Vila is opened throughout the year for registration. Voters who have lost their voter cards can also have them replaced throughout the country at RCs, according to the schedules organized by the registration officers; in Port Vila’s VEO HQs, the issue of replacement (“duplicate”) cards takes place all year long. All card replacements stop being issued two weeks before polling day. 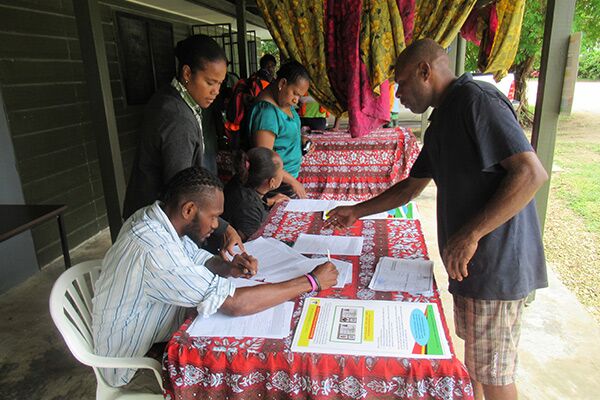 A citizen who has attained 18 years but who is unable to apply to a registration officer in Vanuatu for registration in an electoral list, by reason of being outside Vanuatu, may apply to the PEO by completing and submitting to the corresponding form. Once the PEO is satisfied that a citizen who has made an application is resident overseas, and is eligible for registration, he shall register the applicant in the overseas electoral list and inform him accordingly. The applicant will be registered in the part of the overseas electoral list relating to the constituency in which, in the PEO’s opinion, the applicant would have voted had he not been overseas.