The PEO manages the VEO and is accountable to the EC regarding the exercise of his functions. The Representation of the People Act (the electoral law) further provides for the functions and duties of the PEO. The law stipulates that the PEO has responsibility for the overall administration on the conduct of elections, under the direction of the EC, specifying that the PEO is responsible for the preparation and conduct of registration of electors and the various elections.

According to the law, the PEO’s specific responsibilities include: (a) control of electoral expenditure; dividing Vanuatu into registration area s for the purpose of registering voters; (c) instruction and supervision of registration officers; (d) transport, travel and equipment for registration officers; (e) the design and printing of electoral cards, forms and other materials; (f) arrangements for voters residing overseas; (g) production, distribution and publication of electoral lists; (h) providing information to voters and the general public; (i) provision and distribution and security of ballot papers, ballot boxes and equipment for polling stations; (j) preparation and distribution of instructions for returning officers, and polling clerks; (k) maintenance, preservation and security of all electoral records; (l) preparation of the electoral reports; (m) such other duties as may from time to time be assigned by the EC in accordance with its powers under the Constitution and the law.

According to article 19 of the Constitution, the PEO and all other VEO ofﬁcers are public servants. Their duties and responsibilities are set out in the constitution and the Representation of the People Act. The VEO, which is based in Port Vila, currently has no permanent representation in the provinces and outer islands. Temporary staff is used to prepare and hold the elections in the provinces, and the law states that the PEO should appoint “registration officers” for each of the electoral constituencies. The registration officers are then to recruit “returning officers”, who act as presiding officers in the polling stations, and the corresponding polling staff. 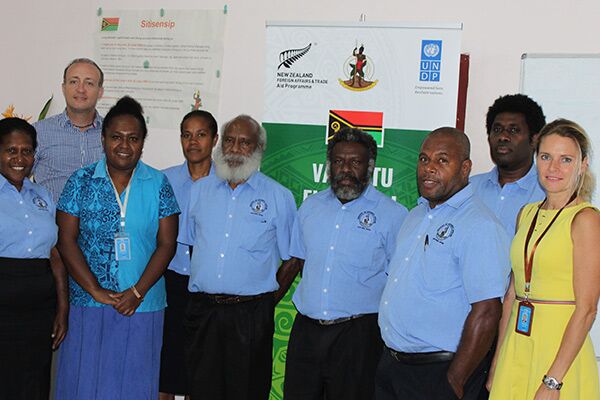